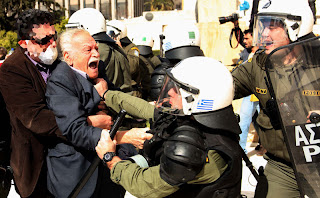 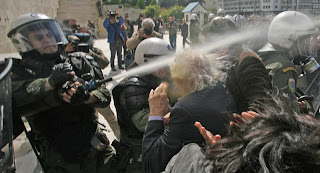 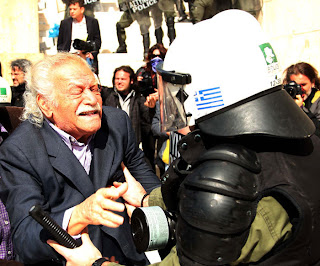 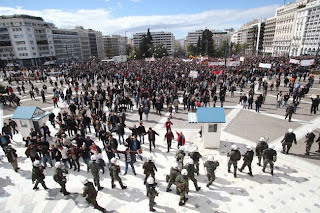 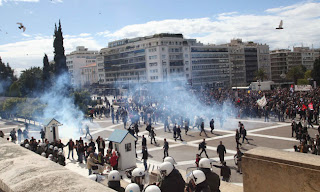 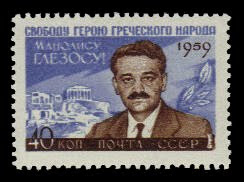 Manolis Glezos on a Soviet era stamp after the WWII

During the today rioting , the police sprayed tear gaz on the face of the old aged now , hero of the Greek resistance and active member of the Left in Greece. He has been hospitalised in serious condition

Manolis Glezos
On May 30, 1941, he and Apostolos Santas climbed on the Acropolis and tore down the Swastika, which had been there since April 27, 1941, when the Nazi forces had entered Athens. That was the first resistance act that took place in Greece, and probably among the very first ones in Europe. It inspired not only the Greeks, but all subjected people, to resist against the occupation, and established them both as two international anti-Nazi heroes. The Nazi regime responded by sentencing Glezos and Santas to death in absentia. 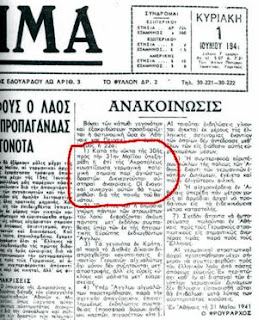 
Long battles erupted today at the Athens protest march against the measures. The GSEE union boss was heavily beaten by protesters while battles with the cops developed for 3 hours all across the centre of the city after riot police attacked anti-Nazi resistance symbol Manolis Glezos
The demo called by ADEDY, the public sector umbrella union, and GSEE, the private sector umbrella union, started gathering at 12:30 in Syntagma square, after another 10,000 strong demo by Communist Party umbrella union, PAME had ended its own demo and marched to Omonoia square. Soon around 10,000 people gathered in Syntagma, a large number considering there is only a 4 hour stoppage and not a strike today.
All was quiet until the GSEE union boss Mr Panagopoulos took the microphone to address the protest. Before managing to utter more than five words, the hated union boss was attacked by all kinds of protestors who first heckled him and threw bottles of water and yogurt on his face and then attacked him physically like a giant swarm. With bruises, cuts and his clothes torn, the PASOK lackey struggled his way towards police lines, as the people attacked again and again. Finally he managed to hide behind the Presidential Guard and up the steps of the Parliament where the hated austerity measures were being voted. The crowd below encouraged him to go where he belongs, to the lair of thieves, murderers and liars.
What the bourgeois media call the "lynching" of the union supreme boss became a prime subject of infight within the parliament with the government accusing the Radical Left Coalition that the attackers originated from its block (GSEE itself blaming KOE, a Maoist group of the Coalition), a half-truth at best. The Communist Party has refused to condemn the attack, only noting it disagrees with it. This is the first time such a high ranking union boss is attacked at a rally that its union has called, and the act is widely believed to mark a new era in union history in greece. The initial phase of the attack against the union boss can be seen here: http://www.youtube.com/watch?v=OJW33W9t0bw&feature=player_embedded
Soon after the beating of Panagopoulos, small skirmishes started between protesters and riot police forces in the form of body-to-body battles in front of the Parliament. During one of these incidents, riot cops attacked Manolis Glezos, the heroic anti-nazi resistance fighter who had lowered the nazi flag from the Acropolis during the german occupation. The elderly man was trying to help a man from being arrested at them time and had to be removed from the battle scene in an ambulance as tear gas fired directly on his face caused him serious pneumonic problems and he remains in serious condition in hospital (for a video of the attack see http://www.youtube.com/watch?v=6FX3S3I7Nos&feature=player_embedded).
The attack on Glezos gave the signal for a general attack of thousands of people against the cops, many of who were wounded during the battles which included rocks, sticks but no molotov cocktails. During the clashes 5 people were arrested, 2 of who are accused under the anti-hood law, while the rest with small non-criminal breaches of the law. During the clashes many riot shields and helmets were taken from the cops and burned along with other flaming barricades on the streets. 7 cops are reported by the police as heavily wounded, some with knee-cap and other bone breaks.
Due to extended use of tear gas at around 14:00 the atmosphere in Syntagma square was so unbearable that among chanting "the cops are not the children of the workers, they are the dogs of the bosses", the demo turned into a protest march with the direction of the Ministry of Labour, half a km south of Omonoia square. At reaching Propylea more clashes with the police took place, while a sole high-ranking cop was isolated and beaten by the crowd. Further down on the way to Omonoia, protesters attacked a riot police squad that was guarding the National Legal Council. The riot police squad was cornered and attacked by means of sticks rocks and flares, before being forced to retreat inside the building after one of its members was captured by protesters and repeatedly trampled by the angered crowd.
The march then continued to Omonoia and from there down Peireaos street where banks, economic targets and expensive cars came under attack, before the march reached the Ministry and the protesters tried to break its central doors. More clashes with the police ensued and the march turned back to front and decided to march once again to the Parliament. On the way, cops came once again under attack by protesters with many riot policemen wounded and retaliating by means of tear gas. After reaching the Parliament, the march refused to desolve and took once again to the street in a bravado of resolve, until it reached Propylea where it came to an end. After the end of the march 6 more people were detained while taking refuge to the Social Security Headquarters, but have been released without any charges against them.
In Salonica, upon reaching the gates of the Ministry of Thrace and Macedonia protesters pulled down the heavy iron fences of the Ministry and moved into its front yard where they were confronted by riot police who made use of tear gas amongst flaming barricades.
Finally, the workers of the National Printing Units have occupied the premises and refuse to print the legislation imposing the austerity measures. Unless the legislation is printed there, it is not legally valid. Meanwhile the occupation of the State General Accountancy by layed-off Olympic Airways workers continues. The workers have also permanently closed off Panepistimiou street (the equivalent of Oxford street in London), at the heigh of the building, with all traffic diverted by side-roads.http://libcom.org/news/long-battles-erupt-athens-protest-march-05032010