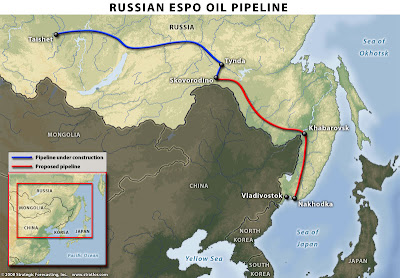 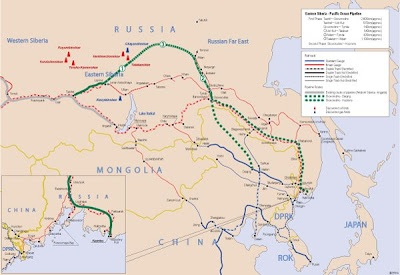 The Russian state oil pipeline Transneft will finish the laying of the East Siberia-Pacific Ocean (ESPO) oil pipeline to the Chinese border within weeks, said Russian Prime Minister Vladimir Putin Monday when presenting to the State Duma, lower house of parliament, a government report."In just a few weeks, the phase during which the pipeline will reach the Chinese border will be over and we will go further to the Pacific Ocean," the Interfax news agency quoted Putin as saying. Russia and China signed an intergovernmental agreement on the construction of an ESPO branch toward China and long-term Russian oil supplies in February.Putin also said that Russia will spend 3 trillion rubles (90 billion U.S. dollars) on anti-crisis measures, including 1.4 trillion rubles (42 billion dollars) from the federal budget."Anti-crisis measures stipulate 1.4 trillion rubles in funds. On the whole, taking into account the effects of tax cuts, Central Bank funds, the National Welfare Fund and other sources to fight the consequences of the crisis and help the economy rebound, a total of 3 trillion rubles has been allocated," the RIA Novosti news agency quoted the prime minister as saying. Putin delivered a government annual report for the first time as prime minister starting from Monday noon. The report includes anti-crisis measures drafted by the Cabinet and the main parameters of a new draft budget for 2009.
(Xinhua News Agency April 6, 2009)
-------------------------------


From Russia with oil… for China

The Russian state oil transportation company, Transneft, has started commercial shipments of Russian oil to China through a pipeline branching off the Eastern Siberia-Pacific Ocean (ESPO) oil pipeline designed to ship Russian oil to Asia Pacific countries. Some 42,000 tons of crude oil had flowed into China 24 hours after it was put into operation.
"The valve gates were opened at 0:30 am Moscow Time, and the operational pumping level was reached at 0:48 am Moscow Time," Transneft spokesman Igor Dyomin told Interfax.
The pipeline will pump some 15 million tons of oil per year and replace the railway as the main means to transport fuel. The pipeline's length is about one thousand kilometers, with most of it being on Chinese territory. It runs from Russia’s Skovorodino to China's Daqing.
The pipeline is a joint project between Rosneft, Transneft, and China National Petroleum Corporation, and Russia hopes it will become its gateway to the growing Asian energy market. In line with a Russian-Chinese intergovernmental agreement, oil to China will be shipped under contracts for 20 years.
στις Δευτέρα, Απριλίου 06, 2009