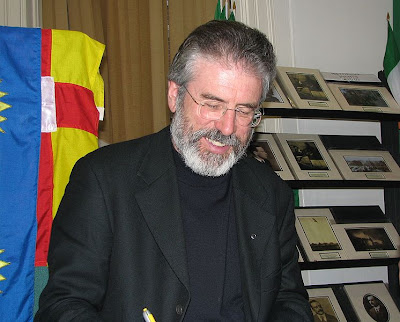 Northern Ireland political leader Gerry Adams urged Palestinian militants and Israel on Wednesday to stop shooting and negotiate an end to their conflict. The president of the Irish nationalist party Sinn Fein toured a neighborhood of the northern Gaza Strip that was bombarded by Israeli forces during a 22-day offensive which ended in mid-January with a shaky ceasefire. Adams, who for years was the face of Republican opposition to British rule in Northern Ireland and once hunted as a guerrilla suspect, said combatants on both sides of the Israeli-Palestinian conflict should settle their differences through negotiations. "What happened here is totally wrong," Adams told reporters in front of the rubble of a house in the heavily damaged Abed Rabbo quarter of the city of Gaza. Israel said it launched the offensive because the Islamist group Hamas, which rules Gaza, was firing rockets daily at Israeli towns.
The Palestinians say 1,417 residents were killed in the three-week war, mostly civilians. Israel says 1,166 Palestinians were killed, mostly armed fighters. "All actions by all the combatant forces should cease - that's by the Israeli government as well as everyone else," Adams said. "If there is one lesson out of Ireland, that is that dialogue works, and dialogue should commence, genuine dialogue, should commence, and a genuine process should be in place." But he added: "I wouldn't draw too many parallels between the situation in Ireland and the situation here." Adams said he came to the Gaza Strip, after visiting Israel, with no "prescriptions" for ending the bloodshed. Adams has always denied membership of the IRA though he is widely held to have been on its leadership council until shortly before the group agreed to give up its weapons. Independent British member of parliament George Galloway met Hamas leaders during a visit to the Gaza Strip in March and was subsequently denied entry to Canada on the grounds that he displayed support for a "terrorist organization". It was not clear if Adams would meet Hamas leaders during his visit. Israel had said Tuesday that Adams would not be allowed into Gaza, claiming he planned to meet with Hamas officials. It was not clear why Israeli officials changed their mind.
στις Τετάρτη, Απριλίου 08, 2009