Tens of thousands of people in Yemen have taken to the streets in the country's capital, calling for an end to the government of Ali Abdullah Saleh, the president. Inspired by recent events in Tunisia and Egypt, opposition members and youth activists are rallying at four different locations in Sanaa on Thursday, chanting for Saleh, who has been in power for 32 years, to step down.
"Enough being in power for [over] 30 years," protesters shouted during the demonstrations.
They also referred to the ouster of Tunisian president Zine El Abidine Ben Ali, saying he was "gone in just [over] 20 years". "No to extending [presidential tenure]. No to bequeathing [the presidency]," they chanted. 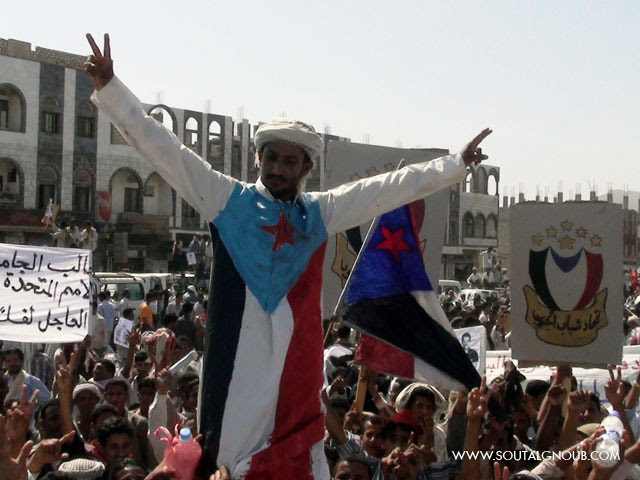 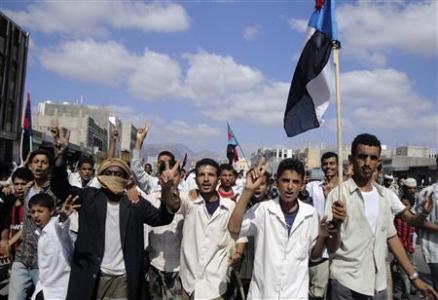 An opposition activist said that the staging of the demonstration in four separate parts of the capital was aimed at distracting the security forces. One area chosen for the protest was outside Sanaa University. Security measures at the demonstrations appeared relaxed, but were tight around the interior ministry and the central bank.
'Not like Tunisia'
Meanwhile Saleh's ruling General People's Congress held counter marches attended by thousands of the government's backers. "No to toppling democracy and the constitution," the president's supporters said in their banners. Motahar Rashad al-Masri, the Yemeni interior minister, ruled out any resemblance between the protests in Yemen and the public outcry in Tunisia and Egypt.  "Yemen is not like Tunisia," he said, adding that Yemen was a "democratic country" and that the demonstrations were peaceful.  He told Al Jazeera that Yemeni authorities will not curb any demonstrations that are peaceful, regardless of their size.
Seven-year mandate

Saleh was re-elected in September 2006 for a seven-year mandate. A draft amendment of the constitution, under discussion in parliament despite opposition protests, could allow him - if passed - to remain in office for life.  Saleh is also accused of wanting to pass the reins of power in the impoverished Arabian Peninsula state to his eldest son Ahmed, who heads the elite Presidential Guard.
------------------------
In Yemen, protesters scattered across the city in the largest wave of anti-government protests Yemen has witnessed yet."The people want a change in president," shouted protesters who gathered at Sanaa University for one of the demonstrations.President Ali Abdullah Saleh, a key ally of the United States in its war against a resurgent Yemeni arm of Al-Qaida, has ruled the impoverished Arabian Peninsula state for over 30 years. At least 10,000 protesters gathered at Sanaa University and around 6,000 more elsewhere in Sanaa in protests organized by Yemen's opposition coalition, Reuters witnesses said. Police watched but no clashes were reported.
Protesters said they were demanding improvements in living conditions as well as political change. One banner read: "Enough playing around, enough corruption, look at the gap between poverty and wealth." A competing pro-government protest organized by Yemen's ruling party in another district of Sanaa gathered a few hundred demonstrators, witnesses said.
At least 100 troops from Yemen's security forces spread across a square where many banks are located, though there were no protesters there, a Reuters witness said. Yemen, in the shadow of the world's top oil exporter Saudi Arabia, is struggling with soaring unemployment and dwindling oil and water reserves. Almost half its 23 million people live on $2 a day or less and a third suffer from chronic hunger. "We are partners in this nation and we won't submit to exclusion. Look at Tunis and what it did. Yemen's people are stronger," protesters chanted at the university protest. Saleh has tried to calm discontent, last week proposing constitutional amendments including presidential term limits with two terms of five or seven years. This week he also promised to raise the salary of all civil servants and military personal by at least 47 dollars a month.
Like the Yemenis and Tunisians, Egyptians complain about surging prices, a lack of jobs and authoritarian rulers who have relied on heavy-handed security to keep dissenting voices quiet.After decades in which Mubarak's rule has never been seriously challenged, Egypt's large, youthful population has grown increasingly restive and bolder in demanding change.Egypt's population of some 80 million is growing by 2 percent a year. Two thirds of the population is under 30, and that age group accounts for 90 percent of the jobless. About 40 percent live on less than $2 a day, and a third is illiterate.Tunisians have offered their own tips to their fellow Arabs. "May God be with you Egyptians," wrote one activist on Facebook, explaining how to deal with teargas or how best to evade arrest.
-------------

Washington has involved in secret joint operations in Yemen after President Barack Obama approved US military and intelligence teams to be dispatched to the country, the Washington Post revealed Wednesday.
The operations begun six weeks ago, involving troops from the US military's clandestine Joint Special Operations Command (JSOC), whose main mission is tracking and killing suspected terrorists, the Post reported. The American agents are helping the Yemeni army develop tactics and providing Sana'a forces with electronic and video surveillance, as well as three-dimensional terrain maps, the report said.
In addition to "highly sensitive intelligence," the US is sending weapons and munitions to be used against what the White House describes as an al-Qaeda cell operating in the Arabian Peninsula, it added.
In late December, President Obama even approved a strike against a compound in southern Yemen where US citizen Anwar al-Aulaqi was allegedly meeting with regional "al-Qaeda leaders," the report added. "We are very pleased with the direction this is going," the Washington Post quoted an unnamed senior administration official as saying of the cooperation with Yemen. Washington has also been sending a steady stream of high-ranking officials to visit Sana'a, including the rarely seen JSOC commander Vice Adm. William McRaven, White House counterterrorism adviser John Brennan, and head of US Central Command Gen. David Petraeus. Earlier in January, the White House pledged $121 million in aid to help the unpopular Yemeni government crush uprisings. However, amid rising concerns over the US role in military operations in Yemen, the government continues to its offensive against the country's Shia minorities in the north. Backed by the Saudi military, the operation has left hundreds killed and tens of thousands displaced in the battle zone, prompting repeated warnings of a humanitarian disaster in the making from international organizations.
στις Πέμπτη, Ιανουαρίου 27, 2011