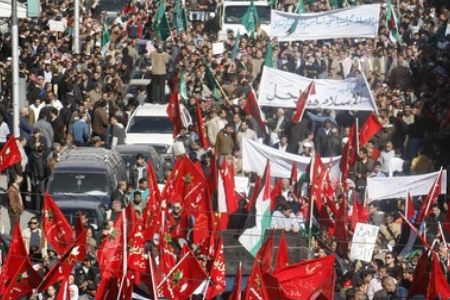 Thousands of Jordanians have marched against the government's political and economic policies, demanding the prime minister's resignation.
The demonstrations, which were held following the Friday prayers in the capital Amman and other major cities, were organized by the country's main political opposition group, the Islamist Muslim Brotherhood. It was the third consecutive Friday of protests in Jordan. The demonstrators denounced Prime Minister Samir Rifai's economic policies, saying reforms introduced by him, which led to cuts in subsidies for basic commodities, have caused the soaring food and fuel prices, unemployment and poverty. "Rifai go away, prices are on fire and so are the Jordanians,” protesters chanted. Protesters have also demanded that the prime minister be democratically elected rather than appointed by the King  !!!.
Today's protests came while the prime minister and the country's ruler King Abdullah II have promised to make reforms. On Wednesday, following two weeks of anti-government demonstrations in various cities across Jordan against high commodity prices and government policies, King Abdullah II announced that it is time to bring about more political and economic reforms in the country. "Abdullah II insisted on the need to move forward with clear and transparent programs of political and economic reform, which will allow the kingdom to overcome the economic challenges, and assure Jordan and Jordanians the decent future they deserve," the royal palace cited the king as saying. "The king underlined the need for senators and all officials to be in constant contact with the people in all provinces of the kingdom to hear their grievances and open a completely frank dialogue with them on their ambitions, their interests and the issues of the day," it added. Jordan's prime minister has also announced a pay increase for civil servants and retirement pensions as well as the expansion of a state subsidy program. The measures, however, failed to stop anti-government demonstrators from taking to the streets. Inspired by the Tunisian revolution, Jordanians say they will press ahead with their campaign until their demands are met.
------------------------------------------------------ 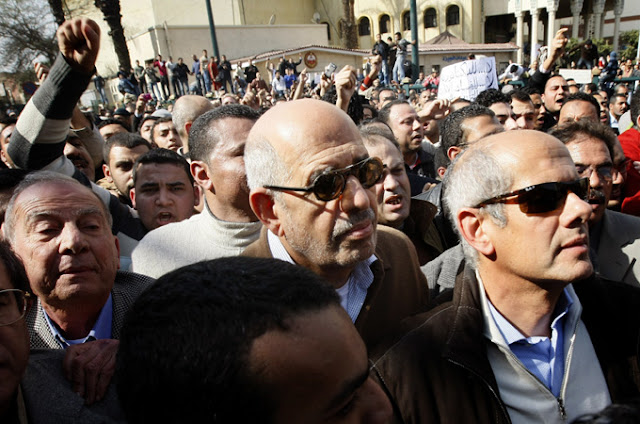 At least two people have been killed as tens of thousands of Egyptians defy a government ban and take to the streets across the country to protest against the government of President Hosni Mubarak.Police in Cairo and other major cities have clashed with protesters who demand that Mubarak cede power. Police fired tear gas, rubber bullets, and used water cannons to disperse tens of thousands of people who joined Friday prayers in a public square in central Cairo. Witnesses said at least one woman was killed during protests in the capital. Another protester was reportedly killed in the northern city of Suez. Reports say security forces have prevented opposition leader Mohamed ElBaradei from leaving a mosque in Giza. ElBaradei has said he would help head a transitional government if Mubarak steps down. At least nine people have been killed during anti-government protests in Egypt over the past days. Similar protests are being held in Alexandria, Mansoura, Suez and Aswan. According to one report, protesters have set fire on the headquarters of the ruling NDP party in cities of Damietta and Kom Ombo. There have been reports of violence in some areas. The Egyptian government banned Friday prayers at some of the country's largest mosques and arrested several opposition activists. The government has also blocked the internet and interrupted mobile phone services. Latest reports say some security personnel have left their posts and joined the anti-government protesters. Egypt's largest opposition group, Muslim Brotherhood, earlier called on all Egyptians to take to the streets. A former Arab League envoy to the United Nations says the Tunisian revolution is inspiring the Arab world, which is worn-out by various dictatorial regimes. In an interview with Press TV, Clovis Maksoud said Tunisia's revolution "is one of the most inspiring events of the Arab world in the contemporary time."
στις Παρασκευή, Ιανουαρίου 28, 2011