Neo fascists side by side with Police vandalising ? !! 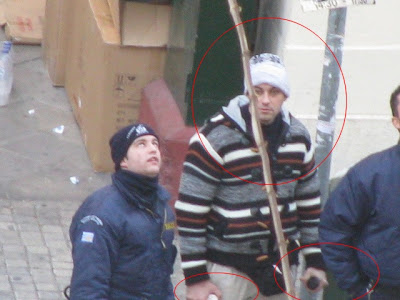 New Provo proofs of fascists and Police under cover pretending to be Rioters.. here ..
new VIDEO shown in national Network of Alpha TV 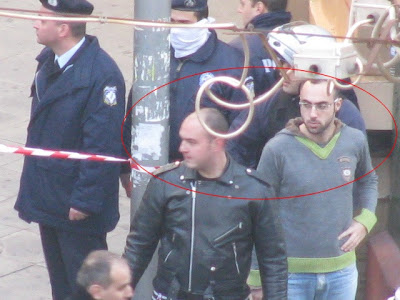 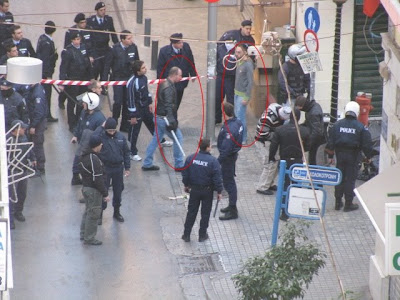 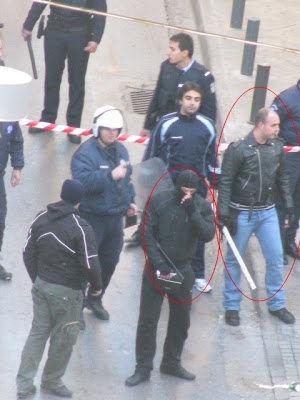 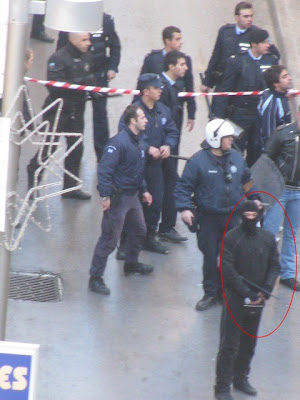 Police is using Neo Fascists and policemen in plane clothes , with rocks and sticks , pretending to be demonstrators , targeting either the demonstrators or vandalizing small shops and houses , trying to divert the climate and scare of the every day citizens.
The pictures are from captured insident, where Policemen in plane clothes and Neo Fascists were clashing with demonstrators .The above ( ie the participation of fascists in the events) have been confirmed this morning by the Mayor of city of Patra, this morning speaking from his telephone to the major TV channel ( Alpha) .
Also according to NEA news paper in Athens, police was spreading rumours that groups of anarchists travelling by bus from the Greek cities of Athens and Thessaloniki to other smaller cities in order to cause chaos and destroy shops. There was an official complain to the Greek Parliament by six members of the parliament from PASOK party. According to the coplain in the cities of Serres, Drama, Komotini, Thebes, Halkida and Corfu, there was business meetings organised by the local chambers. At these meetings, the Police rumours were announced ie. "that Anarchist are coming from Athens with busses to break and burn their shops !!." while in Patras released the information that Anarchists are coming from... Italy !!.
Most seriously in several cities, according to the information, there were lists submitted to the Local Police stations of “volunteers” !! in order to work as aid to the Police forces against the coming Anarchist ( who never appeared of course..)
----------------------------------------------
Also ..The photographer who took the pictures in the link showing of police shooting to the demonstrators, was fired from the newspaper he was working "Eleftheros tipos" ( free press), owned by Mrs Agelopoulou, key respected finger in the organisation of the Olympic games of Athens and idustrialist ... http://garizo.blogspot.com/2008/12/how-do-you-explain-this-mr-paulopoulos.html 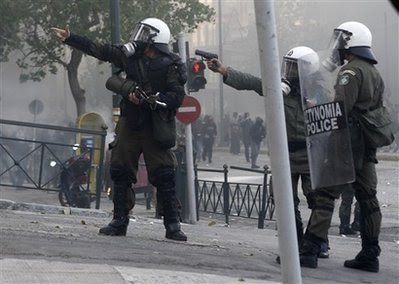 
an other video shown today. We can see Poplice in plane cloths with sticks pretending the rioters.

---------------------------------------------------
a litle bit of history about the NTUA and the reasons that is always considered as the nest of the soscial uprisings in Greece..
The National Technical University of Athens students were in the front line of popular struggles, with highlights the National Resistance under the German occupation (1941-44) and the more recent struggle against the Colonels' dictatorship (1967-74). During the period of the National Resistance, the Student Movement was powerful and well-organized. Shortly after the occupation of Greece by German troops in April, 1941, the Resistance movement began to organize everywhere - in the towns and villages, factories and universities. Within a few months the Resistance Movement was in operation within the confines of NTUA, which in addition to its function as an academic institution, became one of the most active resistance centers.
After a delay of forty years on the 16th of November 1984 NTUA paid tribute to the National Resistance Movement by erecting a simple commemorative column bearing the names of the 18 students who fell in the struggle for liberation. In 1985, a commemorative publication, entitled ``The NTUA [and its part] in the National Resistance Movements 1941-44'', was issued. The recent struggles against the military dictatorship of 1967-74 escalated with the student gathering at the NTUA Patission Campus on the 14th of February, 1973, followed by an unprecedented brutal attack by the police inside the campus and the arrest of several students. This was followed by demonstrations, the occupation of the Law School of the University of Athens on 23rd February, and again on 20th March. Each of these demonstrations was met by force. The protest culminated in the greatest blow against the Junta, the Polytechnion (NTUA) Uprising in November, 1973. Events began on Wednesday, 14th November, and ended on November 17th 1973 with the unprovoked intervention of army tanks and the attack by the army and police against those besieged inside the NTUA Campus and the demonstrating supporters outside in Patission Str. These few days saw the growth of an impressive popular uprising centered at NTUA. The people of Greece and the country's youth all rallied in support of the students, united around the ideals: Freedom, Democracy, Independence, Education and Social Progress. The toll of the Polytechnion uprising was tragic. Several demonstrators were killed; many more were arrested by the military police and were tortured for months in military prisons. The Junta fell a few months later and Polytechnion is being commemorated every year on November the 17th by the students, high school pupils, the NTUA Senate, the democratic authorities, political parties, the Greek Parliament and the people of Greece. The Polytechnion Uprising is an outstanding event in recent Greek history. NTUA honored the victims of the Uprising with a monument within its courtyard, opposite the gate which the tanks of the dictatorship demolished that night. The monument was placed alongside the column commemorating the National Resistance. The two memorials emphasize the continued struggle of the Greek people and the country's youth over the years.

That's great - the post I mean... Ive been busting my ass translating stuff for the entire day - interested, english speaking visitors might find something interesting here:

Thanks - keep up the good work.

Speaking from the perspective of a foreigner observing the Athens riots on the news, I wondered why _students_ would so quickly turn to smashing up shops, looting and burning them.

Now we know - these violent crimes were committed by police with what seems like the the full protection and endorsement of their colleagues, senior management, and even political figures - who are now trying to silence and intimidate journalists who report this! The same people who shot dead a 15 year old child.

It seems like Athens is controlled by organized crime gangs masquerading as government? Disgusting and shocking.

Banks and multinational companies ARE targeted by the Anarchists.

The suspicious events is the burning of small shops and Kiosks, that actions targeting to scare the middle class and turn them against the demonstrators and rioters

"The suspicious events is the burning of small shops and Kiosks, that actions targeting to scare the middle class and turn them against the demonstrators and rioters"

Anarchists have shown for years in Exarcheia that they can protect such people (small shop owners trying to make an honest living) from criminals.

It is crucial that the Left protects the average citizen against right-wing provocateurs and rioting police. Because the government has abandoned the people.

You have given millions the hope they desperately need. Hope and confidence that the neoliberal oppression is done for at last.

But up here in the North, the propaganda storm is in full force already. We will fight it to the best of our abilities.

I also saw masked men throwing rocks at the narchist at the university in Thessaloniki while the police stood by just metres away and did nothing.

I got it on video

Thank you all for your support...
CU around..

it is very interesting, great to see your activity.

nice post. thanks for the information. My Blog : earn money chao!

I additionally observed veiled men tossing rocks at the narchist at the college in Thessaloniki while the police remained by meters away and sat idle.