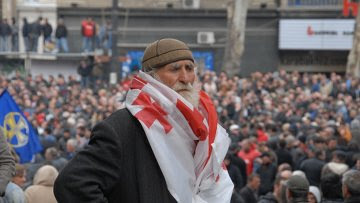 Georgian opposition warns of 'radical acts'
ΤBILISI, May 26 - Georgia's opposition, which has been demanding the president's resignation for around two months, said it planned to start "radical acts" on Tuesday."Today we will seal the railway, from today we will start the most radical acts," Eka Beselia of the Movement for United Georgia, said at a rally outside the Georgian parliament. Leader of the Georgia's Way party Salome Zurabishvili said: "We will shut central highways with cars and then will walk and close the railway track."Zviad Dzidziguri, who heads the Conservative Party, said: "We have plans to initially stage a peaceful rally at the railways and at airports." "Our actions will be peaceful but extremely radical," he said.
In a statement issued earlier on Tuesday Georgia's opposition called on the international community to help resolve the situation in the country and end the stalemate following around six weeks of protests. A total of 14 leading opposition parties and groups first took to the streets in Tbilisi on April 9 to call for President Mikheil Saakashvili to step down over his failure to carry out democratic reforms and last August's disastrous war with Russia.
στις Τρίτη, Μαΐου 26, 2009