Russia against NATO expansion 'in all directions' 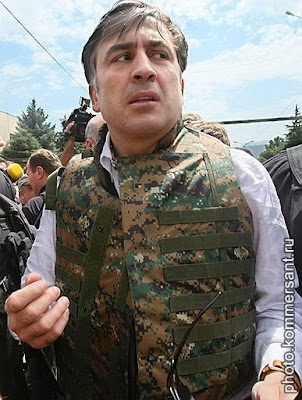 Russia against NATO expansion 'in all directions'
The Russian President says that while the formation of a new Euro-Atlantic "security matrix" is not aimed at NATO, it would negate the need for its expansion. "If we can create such a new matrix of relations, I think this would be effective," Dmitry Medvedev said in an interview with Rossia television. "A new document should be drafted to ensure security in Europe and it should not be aimed against NATO," Medvedev stressed in the interview aired Saturday. "And it would certainly be better than moving NATO in all directions. In any case, such approaches do not suit us and we will react to them," he added. Earlier on Saturday, the Russian leader strongly criticized NATO's insistence on carrying out war games in neighboring Georgia, which engaged in a brief war with Russia in August, despite Moscow's repeated objections to the move seen by the Kremlin as "provocative." "We cannot but be worried by the NATO exercises in Georgia," Medvedev told reporters after meeting Italian Prime Minister Silvio Berlusconi. "They create tension...I think they add nothing to European security."
-----------
NATO drills in Georgia increase tension
BARVIKHA (Moscow Region), May 16 (RIA Novosti) - NATO drills in Georgia have increased tensions and have not contributed to international security, the Russian president said after talks with Italy's prime minister on Saturday."I think they will add nothing to the bank of pan-European security but will on the contrary increase tensions," Dmitry Medvedev told journalists. The Cooperative Longbow/Cooperative Lancer 2009 command-and-staff exercise, which Moscow has criticized as unhelpful in the wake of last summer's armed conflict between Russia and Georgia over South Ossetia, runs from May 6 to June 1. NATO said earlier the exercise had been planned before the Georgia war and was not aimed against Russia.According to NATO, the drills in Georgia are aimed at improving interoperability between NATO and partner countries, within the framework of Partnership for Peace, Mediterranean Dialogue and Istanbul Cooperation Initiative programs, and will not involve any light or heavy weaponry. Russia was invited to take part in the exercises, but declined the opportunity.Over 1,300 troops from 19 NATO member or ally states were originally scheduled to participate, but Kazakhstan, Latvia, Estonia, Moldova, Serbia and Armenia withdrew
στις Σάββατο, Μαΐου 16, 2009