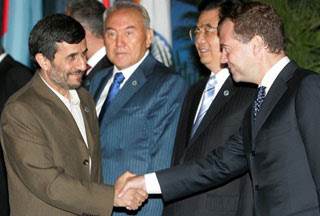 Iranian President Mahmoud Ahmadinejad (left) shakes hands with his Russian counterpart Dmitry Medvedev (right) in Dushanbe on August 28, 2008, when the leaders of China, Kazakhstan, Kyrgyzstan, Russia, Tajikistan and Uzbekistan last met in an SCO summit.
Medvedev invites Ahmadinejad to SCO summit
Russian President Dmitry Medvedev has invited his Iranian counterpart to participate in an upcoming Shanghai Cooperation Organization (SCO) summit. Iran's ambassador to Russia, Mahmoud Reza Sadjadi, was quoted as saying by IRNA on Monday that President Ahmadinejad would attend the summit, which will be held in Russia's Yekaterinburg city. Iran, an observer member since 2005, has been seeking to join the 9-year-old international organization since 2008. The SCO summit, will come at a time when the military alliance of European and North American states (NATO) plans to increase its influence in ex-Soviet nations, such as Georgia. Formed in 2001, the SCO aims to act as a counterweight to NATO's influence in Eurasia and to oppose US interference in Central Asia by developing regional security cooperation between its member states - China, Russia, Kazakhstan, Kyrgyzstan, Tajikistan and Uzbekistan. India, Iran, Mongolia and Pakistan currently hold observer status in the organization.
στις Τρίτη, Μαΐου 19, 2009