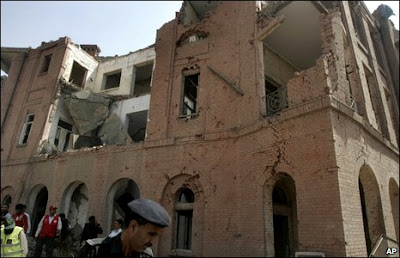 Lahore bombing death toll rises to 40
The death toll from a bomb attack targeting the police offices in Pakistan's eastern city of Lahore rises to 40 as rescue teams find more bodies under the rubble. Earlier media reports said twenty-three people were killed in the bombing that destroyed a police building and damaged nearby offices of the Pakistan's Inter-Services Intelligence (ISI) in the country's second-largest city. Later, city's top civil administrator, Sajjad Bhutta, said that 12 police officers were among the 40 bodies retrieved. The death toll may rise further as some of the 250 injured are said to be in a critical condition. Gunshots were heard immediately after the blast but it was not clear who was firing, a witness said. A big cloud of white smoke rose after the blast. Interior Ministry Chief Rehman Malik said that the bombing was the work of 'anti-state elements who wanted to destabilize the country.' The blast shocked the already insurgency-hit country and was strongly condemned by President Asif Ali Zardari and Prime Minister Yousuf Raza Gilani. Lahore has seen several bomb attacks over the past couple of years, but its citizens felt much safer than those residing in other parts of the country until March, when militants launched two brazen assaults. The latest development comes while the army battles militants in the volatile Swat Valley in the northwest of the country as part of efforts to push back a growing insurgency.
-------------------------------------
Lahore - Pakistan's cultural capital - has faced its share of militant attacks, but it has not had to put up with the kind of sustained campaign it now appears to be facing.
Wednesday's suicide bombing of the police emergency response headquarters on a heavily guarded section of Lahore's Mall road underlines the fact that the cultural heart of Pakistan is a city under siege. It is a clear statement from the militants seen to be under siege in Swat and elsewhere - they are alive and can strike back. Whoever wants to destabilise the country or the government, would go after Lahore . A raid on the police training centre near the city in March - along with an attack on the Sri Lanka cricket team in the same month - brought home the fact that the city is now in the frontline of Pakistan's struggle against militancy. According to security officials, part of the reason Lahore is now under threat may be because it has previously been seen as stable. "Lahore is the only city in Pakistan which has remained relatively peaceful since the 9/11 attacks," says a security official. "It has been Pakistan's saving grace, and whoever wants to destabilise the country or the government, would go after Lahore," the official says. Suspects There are a number of reasons why Lahore could be the centre of such attacks. Many people suspect Taliban militants in Pakistan's north-west. Almost all major attacks inside Pakistan in recent years have been traced back to the tribal areas near the Afghan border.
The siege of the police academy lasted eight hours
Taliban militants fighting the Pakistani army have openly admitted planning and carrying out many of the attacks. They recently issued a propaganda video which took responsibility for carrying out a number of suicide bombings on security forces over the last two years. At least two of them were carried out in Lahore. Fingers have also been pointed at the Lashkar-e-Taiba, as they were after the attack on the Sri Lanka team. Some experts say the attacks could be retaliation by elements within the group for the crackdown on it following the attacks in the Indian city of Mumbai (Bombay) last November. Others, like Pakistani Interior Minister Rehman Malik, accuse another militant group Lashkar-e-Jhangvi, which the US believes has close ties with al-Qaeda. "Almost all the recent major terror attacks have either been claimed or traced back to the Lashkar-e-Jhangvi," he told reporters in Lahore in March. India, too, is blamed by many Pakistani government and security officials, who suspect retaliation for the Mumbai attacks. This was also a view voiced after the attack on Sri Lanka's cricketers. Many analysts are quick to point out the change in tactics, and believe that the attacks are the handiwork of a new militant group.
'Assault tactics'
But what many seem to have forgotten is how it all began. Pakistani militants only started using suicide attacks in a co-ordinated manner in 2004. The first target was Karachi, where a series of bomb attack in May of that year left more than 100 people dead. We will eventually start using assault tactics again, when we have regained our strength in men
στις Τετάρτη, Μαΐου 27, 2009