In 1992 he returned to Egypt where he was arrested and served out his prison sentence.
El Shazly died on 10 February 2011 at the age of 88. 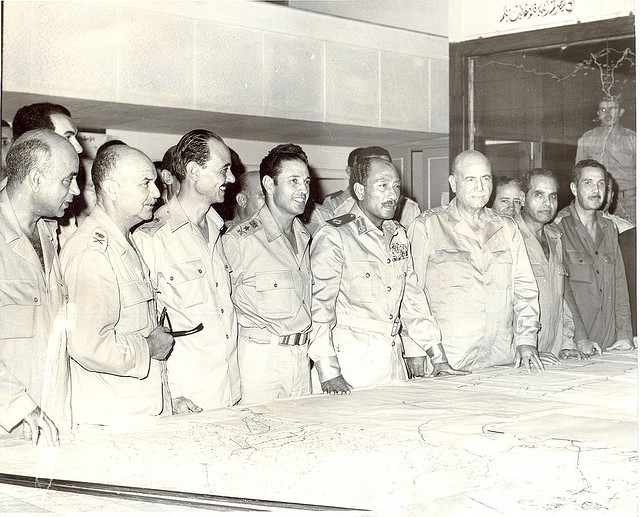 During the October War.
Saad Mohamed el-Husseiny el-Shazly (Arabic:سعد الدين الشاذلي)‎ (1 April 1922 – 10 February 2011) was an Egyptian military personality. He was Egypt's chief of staff during the October War. Following his public criticism of the Camp David Accords, he was dismissed from his post as Ambassador to Portugaland sent into exile in Algeria.
He is the untold hero on the Egyptian side of the 1973 October War, also known as the Yom Kippur War, being the mastermind of the successful Egyptian attack on Israeli Bar-Lev line of defence.

El Shazly was born in the city of Basyoun in the Al Gharbiya Governorate, to a landed family from Shobratana in the Nile delta. His grandfather fought in theKhedive Ismail Pasha's campaign in Sudan, where he died. His uncle, a Pasha, a Member of Parliament and Governor of Behera, was an outspoken critic of the King's policies. Members of the family participated in the Egyptian Revolution of 1919.
Military career

Planning Operation Badr. Left to right in center: Chief of Operations El Gamasy, Saad El Shazly, Anwar Sadat, Minister of War Ahmed Ismail, who replaced Sadek in late 1972.
On October 19, 1973, After the IDF crossed the Suez Canal into Egypt, Sadat sent Shazly to the front to assess the situation. Sadat, in his autobiography, claimed that when he visited the Command Headquarters with General Ismail, he found Shazly collapsed.Sadat used the words, "nervous wreck".Shazly said that the disaster had struck and that Egypt have to withdraw from Sinai. Sadat immediately relieved Shazli and appointed El Gamasy for fear of panic among the high command (Dismissal was not made public). Saad El Shazly has denied Sadat's claims however, stating that he never suggested a withdrawal of all forces from the Sinai, but only suggested the withdrawal of four armored brigades. Another source also mentions that Shazly only suggested the withdrawal of four armored brigades, and makes no mention that he was removed from his position as Chief of Staff. Abdel Ghani El Gamasy, whom Sadat claims was appointed Chief of Staff, seconds Shazly's account that he only proposed the withdrawal of four brigades, and he denies Sadat's claim that Shazly was a nervous wreck. El Gamasy also makes no mention that he was appointed Chief of Staff, or that Shazly was removed from his position. It is worth noting that Sadat reported the entire incident only after Shazly became his political opponent.
Removal from military

As the Ambassador to Britain.
In 1973, at the pinnacle of his military career, General Shazly was removed from military service by President Anwar Sadat and appointed Ambassador to Britain and later Ambassador to Portugal. In 1978 General Shazly sharply criticized the Camp David agreement and publicly opposed it. As a result, he was dismissed from his post and forced into exile. There he wrote this book, his account of the war, for which he was tried by a military tribunal in absentia and without legal representation. He was sentenced to three years in prison. The charges were, writing this book without first getting permission from the Egyptian Ministry of Defence, a charge he admitted to in the press. A second charge of allegedly revealing military secrets in his book, he vehemently denied.
In 1992 he returned to Egypt where he was arrested and served out his prison sentence.