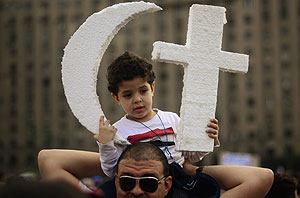 Thousands of pro-democracy demonstrators have poured into Cairo's Tahrir (Liberation) Square as protests against Hosni Mubarak, the Egyptian president, entered their 15th day despite a slew of concessions announced by the government. Tens of thousands of protesters have also come out on the streets in Alexandria, Egypt's second largest city. There were also reports of a protest outside the parliament building in the capital. Witnesses said protesters had pitched a tent in front of the building and are likely to stay there. According to Hoda Abdel-Hamid, Al Jazeera's correspondent in the Egyptian capital, the crowd at Tahrir Square grew rapidly on Tuesday afternoon, with many first-timers joining protesters seeking Mubarak's immediate ouster. The newcomers said they had been inspired in part by the release of Wael Ghonim, the Google executive, after what he said was two weeks of detention by state security authorities.Ghonim was the person behind a page called "We are all Khaled Said" on the social networking site Facebook, which is being credited for helping spark the uprising in Egypt."I came here for the first time today because this cabinet is a failure, Mubarak is still meeting the same ugly faces ... he can't believe it is over. He is a very stubborn man," Afaf Naged, a former member of the board of directors of the state-owned National Bank of Egypt, said.
"I am also here because of Wael Ghonim. He was right when he said the NDP [ruling National Democratic Party] is finished. There is no party left, but they don't want to admit it," she said.
Amr Fatouh, a surgeon, said he had joined the protests for the first time as well.
"I hope people will continue and more people will come. At first, people did not believe the regime would fall but that is changing," he said.
Another Al Jazeera journalist, reporting from the square, said the protesters' resolve seemed very high. Many said they would not leave until their demands are met.
The determined protesters have reportedly composed a 'revolution anthem' to boost morale.
Meanwhile, about 20 lawyers have petitioned Abdel Meguid Mahmoud, the country's prosecutor general, to try Mubarak and his family for allegedly stealing state wealth.
Ibrahim Yosri, a lawyer and a former deputy foreign minister, has drafted the petition.
Constitutional reforms
But Mubarak's message has thus far been that he will not leave until his term expires in September.
However in a statement made on Egyptian state television on Tuesday, Omar Suleiman, the country's vice-president, said that a plan was in place for the peaceful transfer of power.
He annouced formation of two independent committees for political and constitutional reforms. Suleiman said that one committee would carry out constitutional and legislative amendments to enable a shift of power while a separate committee will be set up to monitor the implementation of all proposed reforms. The two committees will start working immediately, he said.
Suleiman stressed that demonstrators will not be prosecuted and that a separate independent fact-finding committee would be established to probe the violence on February 2.
The government had offered on Monday a pay rise to public-sector workers, but the pro-democracy camp said the government had conceded little ground in trying to end the current crisis.
"[The pay rise] doesn't mean anything," Sherif Zein, a protester at Tahrir Square told Al Jazeera on Tuesday.

"Maybe it will be a short-term release for the workers ... but most of the people will realise what this is, it's just a tablet of asprin, but it's nothing meaningful."
Beyond Tahrir Square, life has been slowly getting back to normal in other parts of Cairo with some shops and banks reopening.
Tourism sector affected
However, the country's tourism sector is still suffering, with the area around the famed pyramids remaining closed. The Credit Agricole bank says the protests are costing Egypt more than $300m a day.
"There is a lot of popular public sentiments in Cairo and wider Egypt regarding what those protesters are trying to achieve but at the same time, people are trying to get back to live as normal lives as possible," our correspondent said.
στις Τετάρτη, Φεβρουαρίου 09, 2011