Protesters defy Ayatolahh in Tehran ?? .. with fotos from Athens !! 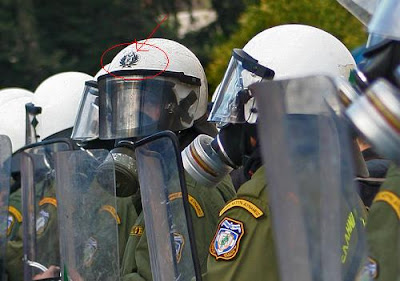 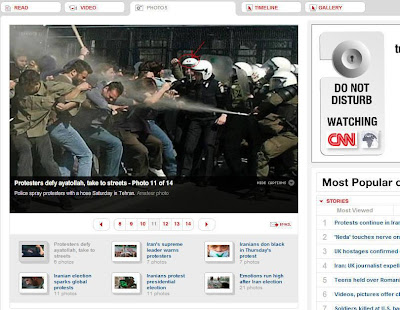 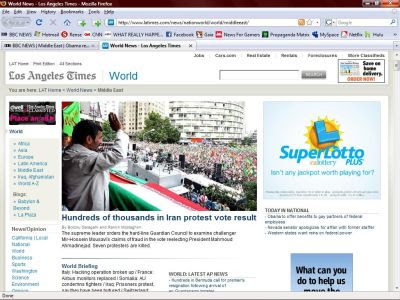 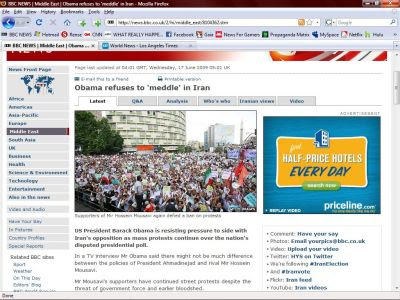 BBC, 17 June 2009
The BBC has again been caught engaging in mass public deception by using photographs of pro-Ahmadinejad rallies in Iran and claiming they represent anti-government protests in favor of Hossein Mousavi.

Infowars, 18 June 2009 The BBC has again been caught engaging in mass public deception by using photographs of pro-Ahmadinejad rallies in Iran and claiming they represent anti-government protests in favor of Hossein Mousavi. An image used by the L.A. Times on the front page of its website Tuesday showed Iranian President Ahmadinejad waving to a crowd of supporters at a public event. In a story covering the election protests yesterday, the BBC News website used a closer shot of the same scene, but with Ahmadinejad cut out of the frame. The caption under the photograph read, ‘Supporters of Mir Hossein Mousavi again defied a ban on protests’. The BBC photograph is clearly a similar shot of the same pro-Ahmadinejad rally featured in the L.A. Times image, yet the caption erroneously claims it represents anti-Ahmadinejad protesters. “Well I guess it sure was a popular fictional rally for Mousavi, because I later noticed while browsing the news sites a familiar picture on the BBC’s lead Iran story - it shows the same crowd, zoomed in to cut out Ahmadinejad,” a reader told the WhatReallyHappened website. “It is clearly the same protest as in the background are the same tree and odd circular building. However, the BBC managed to outdo the LA times in quality reporting - their actual comment under the photo from the huge PRO-Ahmadinejad rally reads ‘Supporters of Mir Hossein Mousavi again defied a ban on protests’ - a blatant lie and deliberately misleading description of what is actually occurring in Iran!” As soon as the truth about the misrepresented images surfaced on the WhatReallyHappened website yesterday, the BBC changed the photo caption on their original article. This is not the first time the BBC has been caught red-handed using crude image and video framing techniques for the purposes of political propaganda. During the fall of Baghdad in April 2003, the BBC and other mainstream news outlets broadcast closely framed footage of the “mass uprising” during which Iraqis, aided by U.S. troops, toppled the Saddam Hussein statue in Fardus Square. The closely framed footage was used to imply that hundreds or thousands of Iraqis were involved in a Berlin Wall-style “historic” liberation, yet when wide angle shots were later published on the Internet, footage that was never broadcast on live television, the reality of the “mass uprising” became clear. The crowd around the statue was sparse and consisted mostly of U.S. troops and journalists. The BBC later had to admit that only “dozens” of Iraqis had participated in toppling the statue. The entire scene was a manufactured farce yet the propaganda technique of blocking wide-angle shots from being broadcast convinced the world that the event represented a triumphant and historic mass popular uprising on behalf of the Iraqi people. Whatever your views on the legitimacy of Ahmadinejad and the accuracy of the Iranian election results, the fact that the Anglo-American establishment and its media organs are exploiting and fanning the flames of chaos in Iran to provoke further instability is unquestionable. Indeed, the U.S. State Department, which routinely demonizes the Internet as a tool of extremists and terrorists when it is used to criticize U.S. foreign policy, took the unprecedented step today of requesting that Twitter.com “delay planned maintenance work so that Iranian protesters can continue to use it to post images and reports of unrest,” according to a London Times report. link: http://www.infowars.com/bbc-caught-in-mass-public-deception-with-iran-propaganda/